There was a lot of discussion this year, thanks in no small part to Bayonetta 2, attempting to define the “female power fantasy” in gaming. Bayonetta is a fitting character upon whom to center this conversation, given that she is both strong physically and also sexually intimidating in a way that seems designed to at least poke fun of, if not all out terrify, the male gamers who would typically ogle and otherwise degrade a character who looks and acts like Bayonetta. Yet, oddly enough, this year I found my example of a female power fantasy in a video game whose fantasy was quite clearly not supposed to be “for me” – Shadow of Mordor. 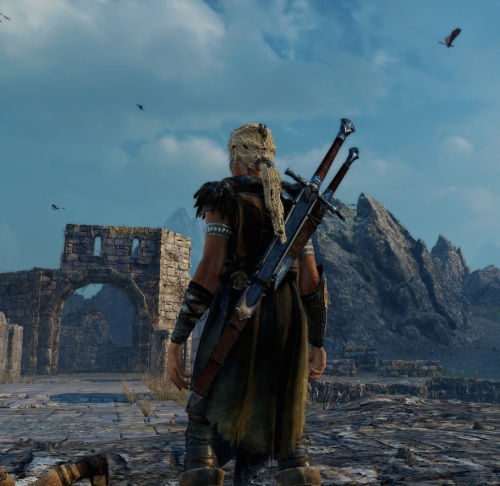 A so-called female power fantasy can never exist in a vacuum – it will always be influenced by the patriarchal norms that inform what we believe makes women powerful. So while I appreciate and agree with Maddy Myers’ assessment that Bayonetta’s overt sexuality does not necessarily mean that she is defined by the “male gaze” (maintaining all of Maddy’s reservations about that term) or that Bayo exists as a sex object for the player, Bayonetta doesn’t work as a power fantasy for me specifically because much of what the game displays as being powerful about Bayonetta hinges and is dependent upon her sexuality. There is nothing fundamentally wrong with this, and Maddy points out that perhaps our unwillingness to value sexual power as highly as other forms of power is rooted in puritanical American squeamishness, if not also our historical tendency to assign scary sexual power to women. But for me, at least, a power fantasy that is rooted in sexual power is still not a fantasy that feels as if it is “for me” when sexual power is practically the only way in which characters who share my gender are allowed to be powerful. My idea, as a woman, of a power fantasy is a world in which I can have the types of physical power that narratives often exclusively assign to male characters – essentially, a world in which my gender is largely inconsequential to the power I can achieve.

Shortly after Shadow of Mordor‘s release, Carolyn Petit rightfully took the game to task for its disgraceful treatment of women characters. Of the five women characters in the game (and I say five women characters, not five named women characters because there are no women in this game aside from these five), three must be rescued from various forces of evil during the course of the game’s story, and the other two are murdered in front of their respective husbands in order to give their husbands proper revenge motives. Carolyn is completely right – Mordor’s treatment of women is despicable and brings an already simple and cliché story down even further.  But since I was already aware of the largely negative reviews Mordor’s story had received when I purchased the game, and because I have a deep-seated hatred of all things Tolkien, my likelihood of enjoying the game’s story was in no way a factor in my decision to buy the game.  Like so many others who have wanted to try Mordor, I was here for the Nemesis System.

Pictured above are one of my first and my final meetings with Gûndza the Claw. Gûndza and I met very early on while I was playing Mordor, early enough that I didn’t fully understand when it was best to cut my losses and run, or at least to get to higher ground and make a more strategic attack. Consequently, I was killed repeatedly by Gûndza and one other Uruk captain who always managed to show up to the fight (I can only assume they were BFFs) during my first few hours of gameplay.  Soon, they were each level 20 captains who still always showed up in a pair anytime I attempted to go after one of them.  I killed Gûndza’s friend first, but the next time I fought Gûndza, his friend had returned from the dead. Then I killed Gûndza, but he reanimated when I next faced his friend. For a long time, I was convinced that the game was not going to allow me to kill the pair unless I killed them both at exactly the same moment. Every time I managed to kill either of them, and it took several times before they stopped coming back, I yelled at my computer in satisfaction. Simply put, I fully enjoyed what the Nemesis System had to offer, but my enjoyment stemmed less from the Uruk characters themselves than their interactions with my character.

Look at how Gûndza threatens me in the two scenes pictured above. He is annoyed by my resilience in the bottom picture – practically a compliment – and utters one of the more violent threats in the game in the top picture, saying that he plans to kill me slowly and painfully. Gûndza’s threats, particularly the bottom one, are directed toward a worthy adversary. The Uruks in Mordor consistently treated my character as an equal in combat skills. Sometimes they mocked me, but often it was clear that behind those jabs was a fear of the stories they had heard about me from the rest of their army. And never once in the game did these supposedly evil and bloodthirsty Uruks threaten me by way of gendered slurs or sexual violence.

Now, there is a very good reason for this and it cannot be attributed to Monolith’s intentional desire to make me, as a woman player, feel more comfortable playing their game. While it appeared as if I played as a woman, in fact I never played as anyone but Talion, the game’s male protagonist. Lithariel is a character in the game’s story, one of the women Talion has to save, and with a free DLC pack that is now downloaded automatically upon purchase of the game, you acquire a Lithariel skin. Lithariel’s skin has none of her own voice acting, uses all of Talion’s animations, and does not appear in cut-scenes. If you think this sounds immersion breaking, you are absolutely correct – although I quickly found myself thinking of my Lithariel as a largely silent mercenary who was hired by two whiny men to do the heavy lifting in their boring revenge plot. She listens to them conspire and take credit for the battles she fights, but never particularly cares as long as the pay is good.

Regardless of any headcanon I imagined for my version of Lithariel, the game itself – and by extension my enemies, the Uruks – never thought of me as anyone other than Talion. As such, I was happily free of the common threats of sexual violence and use of slurs that often accompany a “strong female character” when such a character is allowed to be a part of a video game’s narrative. Lara Croft in the Tomb Raider reboot could conceivably have worked well as a female power fantasy, if not for the constant feeling the game reinforces that, if I allowed Lara to die, she would be in immediate threat of assault at the hands of the Solarii. Tomb Raider‘s enemies consistently threaten Lara with slurs, and one of their members does assault Lara early on in the game – the catalyst that supposedly makes her capable of killing a human for the first time. Even the game’s simple insistence that the Solarii refer to Lara as “girl” throughout the game stole away some crucial aspect of her power. While the Solarii become increasing wary of Lara as the game progresses, their early threats constantly reminded me of the specific type of danger that Lara, as a woman, faced and made it impossible for me to fully enjoy her rise to power. Video game narratives that insist upon the use of gendered slurs and sexual threats to amp up the perceived stakes will never function as power fantasies for me, because they are too deeply rooted in a world that consistently demonstrates the ways in which I have less power because I am a woman.

In Mordor, my Lithariel walked like a battle-hardened warrior. She fought like an expert. She was never degraded by enemies who sought to find ways to terrorize her that were specific to her gender. And all this was only possible because the game knew she was really Talion – a man.

This was never more apparent than when my Lithariel was tasked with rescuing herself from an Uruk stronghold. I was stunned at the differences in the two models when I viewed them side by side. My Lithariel had a slightly larger frame with an entirely different walk and fighting style. The game’s Lithariel is supposedly an experienced general and fighter, but she quickly finds herself and her forces overwhelmed when they attempt to storm the Uruk’s stronghold. My Lithariel wiped out that same stronghold single-handedly.

Or, more accurately, Talion did.

So I cannot praise Monolith because it unintentionally created a universe in which I was able to play a strong and capable woman warrior, though Mordor remains the closest I have come in a very long time to understanding what a female power fantasy would look like to me. Bayonetta is a fascinating character and a perfectly valid example of what women’s power fantasies can look like in video games, but the ways in which her power is inextricably tied to her sexuality simply serve to remind me that she is woman first and powerful second. Saints Row IV goes to great lengths to ensure that the Boss acts the same and is treated the same by all the other characters regardless of gender, but I can’t shake my unease that two of titles that have done the most substantial work in this arena have both been comedies. Comedies are in no way inferior to their dramatic counterparts, but powerful women in video games should not be confined solely to comedic narratives.

The key to my female power fantasy is simple. Let me play as a woman, but do not change my character’s speech, movement, or fighting style to fit your definition of “feminine.” With all due respect to Bayo’s fantastic moves, I would much prefer to play as Lithariel, wielding a heavy broadsword with grace and skill. Above all else, allow my female character to inhabit a world in which merely existing as a woman does not mean she is subject to additional fears or threats that her male counterparts never have to see. The real world is scary enough for women – why would we want those fears to follow us to our fantasies?

15 thoughts on “A Mile In His Shoes: Playing Shadow of Mordor as Lithariel as Talion”

This work is licensed under a Creative Commons Attribution-NonCommercial 4.0 International License.